The Cause of Menstrual Cramps

Avoid the Cause of Menstrual Cramps

Women with PMS often experience painful periods (dysmenorrhea) which are most often caused when the endometrial lining of the uterus extends into the muscular wall of the uterus (adenomyosis). When shedding of the endometrium occurs (menstruation), the blood is released into the muscular lining, causing severe pain. Conventional medicine treats this pain with NSAIDS (non-steroidal-anti-inflammatory drugs) such as ibuprofen, but ignores the underlying metabolic hormonal imbalance that caused it. The problem can often be simply resolved by restoring proper progesterone levels, which restores normal growth and shedding of the endometrium. Xenoestrogens may cause this abnormal growth of the uterus lining into the uterine muscle tissue.


The Root Cause of Menstrual Cramps

The cause of menstrual cramps according to Dr. Lee, a Norwegian, is the abnormal growth of the uterine lining into the uterine muscle by estrogen dominance. What does this mean? It means that

women are getting too much estrogen. This excess estrogen is causing the abnormal growth.

New research that has come to light during the past 5 - 10 years has shown that synthetic chemicals can mimic estrogen.

Around the world, there are approximately 100,000 different synthetic chemicals on the market. Some

of them mimic estrogen in the human body.One classic estrogen mimic is DDT. In 1950, two Syracuse University biologists, in an experiment, gave injections of DDT to baby roosters. The roosters grew up looking like hens. Unfortunately, the U.S. still produces 96 tons of DDT a year (in 1991) and exports it to third world countries. Then we consume DDT on imported produce. DDT is stored in the fat, notably the breast fat.>The breast fat may concentrate a form of DDT up to 700 times than that of the blood. Blood levels of a form of DDT can typically be measured in the blood at several parts to tens of parts per billion.

When I first saw levels of parts per billion, I thought it was too low to worry about. Unfortunately, our human body operates on tens of parts per trillion. In other words, some of these chemical estrogens may be found routinely at levels one hundred times the concentration of our own hormones.

Imagine a baseball glove representing a receptor for estrogen. Think of the glove waiting to catch a ball. DDT is represented by one hundred shiny plastic balls. One watermelon representing your human estradiol. Which one does the glove catch?

New research by Soto, M.D. at Tufts University medical school in 1991 showed that chemical additives that make plastics last longer have estrogen stimulating effects on breast cancer cells in the test tube at parts per billion. Plastic test tubes with a new plastisizer stimulated breast cancer cells to grow wildly. Stanford University professors found a similar effect from an additive, bis-phenol A, used in polycarbonate water bottles. Bis-phenol A is also used in dental filling composites. Spanish researchers even found that some of the varnish sprayed in food cans (to prevent the "metal" taste) leached into the food. This slightly tainted food contained more than enough estrogen mimicking chemical to stimulate breast cancer cells in the test tube to grow rapidly. The above chemicals with estrogen mimicking effects are a class of chemicals known as alkylphenols. 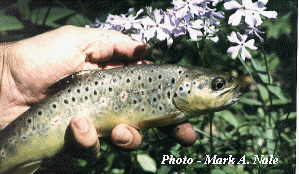 In 2004, 42% of male bass in the potomac river near Washington DC were found to be producing eggs. Researchers highly suspect hormone disrupting chemicals in the river are causing male bass to be sort of female. This also mirrors a similar study that found feminized male Colorado fish called White Suckers in the river below a sewage treatment plant. As of 2004, little is done to test for these chemicals -- either in river water or in drinking water. The U.S. Environmental Protection Agency has not set standards, saying more research is needed to determine which contaminants are harmful and what levels are unsafe.

Some alligator populations are having trouble reproducing because the male penises are too small (blush!). The female alligator ovaries had used up all their eggs prematurely ("burned out"). Researchers have implicated chemical hormone disrupters.

In 1970's and 1980's, an epidemic of early puberty girls as young as a year old in Puerto Rico began menstruating after eating meat and dairy products with high amounts of estrogens. Some young boys developed breasts.

Women are now beginning to menstruate in the United States at age 10. The age of menarche used to be 16. Authorities have insisted that this is normal for a population with good nutrition. Is it?

Women are now beginning to menstruate in the United States at age 10. The age of menarche used to be 16. Authorities have insisted that this is normal for a population with good nutrition. Is it? Herman-Giddons in a landmark study done in 1997 published in Pediatrics showed that out of 17,000 girls, 15% aged 8 years old began to show signs of puberty in the United States. See the Time Magazine article! The Time Magazine article points a finger at chemicals in our environment that mimic estrogen.

One study showed that elevated levels of DDT and PCB were not markedly higher in women that had breast cancer. An editorial confidently labeled the new concerns as chemical phobia. However, these are only two chemicals. We don't know much about chemical interactions nor all the other chemicals which are as yet untested.

In the last 5-10 years, new research has shown that certain chemicals in modern society do mimic estrogen in the test tube. These chemicals can come from sources that we previously thought were inert such as plastics that might be used to package food and detergents. Some animals in the environment also show evidence of hormone disruption.

Presently, we do not know what these test tube studies mean for us. Human bodies can act differently. Unfortunately, only a small fraction of chemicals have been tested for estrogen mimicking effects, and these chemicals are active at infinitesimal small quantities way below what was previously thought to affect humans. Estrogen mimicking chemicals can also act synergistically to amplify each other or even block each other. This is widely known, but exact synergistic reactions and levels at which they occur are virtually unknown.

Chemicals in our environment having estrogenic effects known as xenoestrogens are now being investigated by the Environmental Protection Agency.